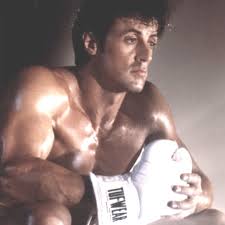 Simply said, the Rocky series provides inspiration to many people.  With its underdog story, the iconic characters, the motivational music, and quotable lines – the film series has become the “role model of movies”.  Not just in the US, but around the world, the films have become an example of great storytelling with uplifting themes.

I was in Germany when I first started watching the films and I remember how big of a star Sylvester Stallone became.  In fact, his portrayal of his character in Rocky IV was so realistic that I remember there being a big story about how East Germany wouldn’t let him into their country.  They felt that the actor had anti-Russian feelings (which of course wasn’t true).  To many people, the Rocky story is similar to their lives.  For those of us striving to prove that we can “go the distance” in whatever we do, the inspiration is Rocky Balboa.

The character arc of Rocky Balboa is exactly what many of us go through – we live our lives at crossroads, personally and professionally.  When many others don’t believe in us, whether it’s our bosses, our co-workers, ourselves, some do and it’s that one moment of belief that helps us to get motivated to live the best life we can for ourselves.  Men and women will find inspiration in the love between Rocky and Adrian.  After a few times of awkwardness, they finally realize they love each other.  Then, Adrian is rushed to the hospital during her pregnancy and into a coma.  With Rocky by her side, Adrian comes out of it and together they have a baby boy.  When Rocky is down and out, Adrian is the one that lifts him up and reminds him that they’re in it together.  She’s there for him as a wife, but also as his best friend.  And even when Rocky’s relationship with his son goes sour, Adrian is the one to bond them together again.  All the way to her tragic death, she stands by Rocky’s side and even after she’s gone, she still provides the spark he needs in his life.

Rocky’s life is filled with various characters, besides Adrian.  He has a mentor in Mickey Goldmill and a friend in Paulie.  He also has a friend in Apollo Creed (eventually grown out of respect) and Gazzo (sparingly).  And even through his enemies, he learned valuable lessons.  (“You ain’t so bad” to Clubber Lang and he learned that people change fighting a Russian – who knew?).

The Rocky story is the ultimate story.  It blends themes of “life and death”, “friendship and hostility”, “rags to riches”, a life cycle that spans over 40 years.  The Rocky story is a story for yesterday’s generation, but also the generation that will come tomorrow.  It gives us the motivation to realize that no matter what life brings, we’re moving forward.  We’ll be OK.  You know how I know?  Because of the stuff in the basement.

Next week, we’ll revisit another inspirational story – one filled with childhood memories, toys, and someone to tell us to take our lives “to infinity and beyond.”