For my newest Tuesday weekly feature, I thought I’d dip into the past giving ideas and recommendations on anything from food to pop culture to games from here to around the world.  And so for the first post, I take you to Berlin, Germany where a popular little dish is eating a Currywurst.

If there is something that Germany has a lot of, it’s a lot of “wursts” – different types of sausages, including Knockwurst, Bratwurst, Kasewurst, Bockwurst and my personal favorite, the Currywurst. 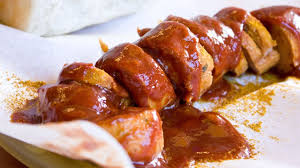 The Currywurst is something I tried for the first time in the early 80s and I became obsessed with it.  I would walk down to a nearby “imbiss”, which is a small type of bar that sold snacks and drinks of all varieties.  They would hand me a small paper tray, in which I would have a sausage cut up in a curried sauce.  It had a zest to it, but it wasn’t really spicy.  It would be my daily snack.  (And usually I would also have French fries coated with mayonnaise on the side). 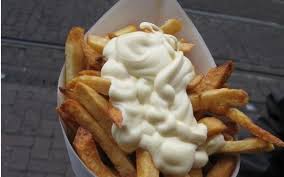 Since then, I’ve tried to recreate it in my own home and while it’s definitely not the same outcome, the taste is fairly similar.  Honestly, it’s really easy to make.  And cheap.  I use smoked sausage, although I’ve also done it with Bratwurst and Kielbasa, too.  In some stores (such as a Meijer or Kroger), they actually sell a specialized Curry sauce.  Some sell it with other condiments (“Curry Ketchup”), while other stores have an international aisle where they may sell it as an imported “Curry Sauce”.  Either one has worked for me.  I’ve also simply used a regular ketchup bottle, mixed it with some tomato paste and put some curry powder, salt, pepper and some creole seasoning in there as well.

The food is really popular in Berlin.  In fact, they’ve even opened up a Currywurst museum dedicated to the sausage itself.

So in summary, if you don’t make it out to Berlin any time soon, try a flavorful Currywurst yourself.  And if you do make it out there, stop by, have a Currywurst and then don’t forget to visit the museum…to have some more!  It’s what Berliners do! 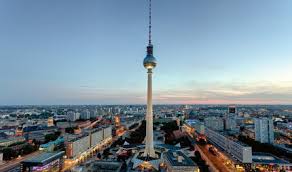